Home / News / What is the working principle of the ice machine

What is the working principle of the ice machine

The ice shaver is a device used to shave ice cubes into snowflake-shaped crushed ice, which can produce shaved ice food with various tastes and flavors.

The principle of the commercial ice shaver is roughly as follows: after the ice shaver is plugged in and started, the plunger pump inside the ice shaver will spray the water mixed with salt through several filters to spray 0.2 kg of water evenly onto the surface of the inner cavity, and then the salt water will be A 3mm thick ice surface is instantly formed on the refrigerating surface of the outer cavity, and then under the action of the high-speed rotating ice skates, the ice that has just been made on the surface of the outer cavity is beaten into snowflake fragments and falls into the storage bin! It becomes us! The cool shaved ice I usually eat! The principle of the civilian ice maker is basically the same, mainly relying on the rotating ice box inside the cavity. 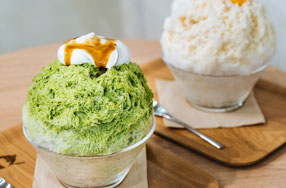 Of course, you need to pay attention to the following points when using the ice shaver: First, the water used for ice making is brine. As for the concentration of brine, it needs to be adjusted automatically according to the amount of ice required and the modulation pump. Secondly, the main body of the ice maker is divided into two cavities, the outer cavity and the inner disc of a certain density of copper pipes! The technical term is (evaporation cavity) is what is said to be refrigeration. This is the core of the ice maker and requires good maintenance. Then the outer cavity of the ice shaver, electric ice shaver, sand ice machine and ice frying machine is a very regular round stainless steel cavity. There is a three-lobe scraper in the center and the distance between the inner wall and the inner wall can be adjusted by itself, generally 3 mm. It can just scrape the inner wall of the knife. There are several sets of evenly distributed copper nozzles on the top of the ice blade, which turns the scraped ice into snowflakes.

0
PREV: How to do the maintenance of the ice shaver      NEXT: What are the factors that cause errors in the use of ice cream machines